Scoil Chaitríona Baggot Street has a long and proud tradition of teaching and learning that goes back almost 200 years.

Now named after our founder’s Irish name, our school sits on the grounds where the first Mercy House was opened in 1827 by the Blessed Catherine McAuley, founder of the Congregation of the Sisters of Mercy.  She started a school so that girls from poor backgrounds could learn the necessary skills and abilities to be able to find work. This was the first of the many Sisters of Mercy schools around the world. 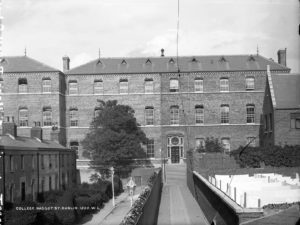 In the early 1830s, the Blessed Catherine McAuley then founded Our Lady of Mercy Training College on the very place that our school now stands. Known as a Sedes Sapientiae (Seat of Wisdom), it was was recognised as a Teacher Training college for women in 1883. The old photograph on this page shows the current  entrance to our current school building from Baggot Street – is it obviously before Miesian Plaza was built on the left! 🙂

In 1903, the college moved out to Carysfort Training College, which was also a Sisters of Mercy college . While the teacher training college may have disappeared from Baggot Street, the Congregation continued to operate a primary school, then called either the Mercy School or the Convent School.

Many years later, our school’s story blended with that of the Christian Brothers, founded in 1820 by the Blessed Ignatius Rice. In 1986, the primary school of Westland Row CBS was merged with Scoil Chaitríona Baggot Street. Later again, in the early 2000s, our school came under the Patronage of the Archdiocese of Dublin.

We are now the parish school of St. Andrew’s in the historic parish of Westland Row. While our patronage and trusteeship has changed over the years, our relationship and history with the Sisters of Mercy continues not only in our name but also in the Order’s on-going trusteeship of our school grounds. Our connection with the Christian Brothers and Westland Row CBS lives on with our black and red school tie.